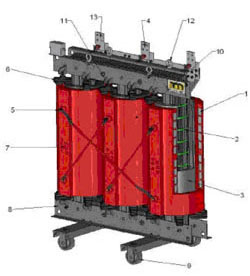 CAST RESIN TRANSFORMERS
Thanks to the long experience of SHERPA and to the sophisticated calculation and design techniques used, our transformers for distribution, rectification and traction can be provided in a very large range of sizes, primary and secondary tensions, insulation classes and losses.
Following tables present the technical features of some transformers in our production range. They were chosen according to norm requests and to market preferences in power distribution sector for the main industrial countries. Different powers, as well as different primary and secondary tensions, are nonetheless part of our production range and application experience. In this case it is useful to get in contact with us for technical data confirmation.

SHERPA designs and manufactures CRTs for:

RATINGS
A dry-type transformer is one in which the magnetic circuit and the windings are not immersed in an insulating liquid, IEC 726.

SCOPE
This catalogue refers to cast-resin transformers with rated power levels between 100 and 2500 kVA, with higher voltage for the material, up to and including 36 kV. In addition, Electrical Power Systems manufactures transformers up to 5000 kVA in the 36 kV series.

MANUFACTURING STANDARDS
The transformers described in this catalogue are designed and tested in accordance to the European Union Harmonisations Documents HD 538 and HD 464 as well as IEC 726, IEC 76 standards. However, and by request, they can be manufactured according to other national or international standards.

HIGH VOLTAGE
This material is designed for voltages of ≤ 36. Specific figures are not given for this parameter because of the wide variety of voltages used. Transformers can be supplied on demand to run at two different primary voltages.

INSULATION LEVELS
As per IEC 76, BS 171 and VDE 532 standards these are set in accordance with the highest voltage for the material, being the level immediately above the rated voltage.
SNO-Energietechnik transformers are in the F insulation class, which, according to IEC 726, have a temperature rise of 100 K.

Cast resin transformers have the following advantages:
• Self-extinguishing
• In case of fire outside the transformer but which affects it, it burns only with difficulty and with poor flame, which rapidly dies out when the source of fire ceases.
• High Thermal inertia
• Due to a greater mass than equivalent transformers in liquid, the time constant is much greater, so that there is a better tolerance of overloads of short duration.
• Compactness
• The only components being the magnetic circuit, the windings and the fixing elements, the design is very compact, thus it is a robust assembly and vibration-proof. This makes transformers ideal for installation in mobile material.
• Good resistances to short-circuits
• As a result of the cast resin which surrounds the conductors as well as linking them strongly together, resistance to the electrodynamics forces generated in a short-circuit is very high. Again, as the density of current is lower than that the transformers with liquid, the maximum transient temperature reached in a short circuit is much lower than the limits specified in IEC 76.
• Reduced maintenance
• All that required is to clean dust off the surfaces, should it occur
• Easy Installation
• Protection against contacts is sufficient, since there is no need for a deposit to hold the liquid, nor brickwork installation

II- LOW VOLTAGE WINDING
Normally this winding is made with a bare-strip form conductor, although with low power levels a rectangular wire insulated with NOMEX is also used. In both cases insulating material pre impregnated with epoxy resin is used between the layers which, in polymerizing, unites the conductors among themselves, producing a compact assembly with high resistance to the stress developed during a short-circuit.
This type of windings allows the insertion of one or more axial ducts, which facilitates the rapid dissipation of beat and the absence of hot points. Finally, the finished coil is impregnated with epoxy resin which, once polymerized, gives it strong resistance against damp.

V- STRUCTURAL ELEMENTS
This winding is carried out with two different types of conductors: bare strip or enamelled wire. Strip windings are formed by several coils or disks made one after another in a continuous process. The turns, their insulations, the taps and the different positions are fully programmed, controlled, and directed through a computer integrated into the automatic winding machine itself. Enamelled wire conductor windings are also made in “wafers” each one formed of several layers, between which insulating material is interleaved.

IV- CASTING PROCESS
The resin used by SNO-Energietechnik is of epoxy type with thermal class „F“, for a temperature rise of 100 K (maximum temperature of insulating system 155°C) The casting system prepared for our manufacturing installation contemplates the use of four principal components:

• Epoxy resin
• Filler material
• Hardener
• Coloring
The casting process, the dosage of components and the different steps from moulding to polymerization. The mixture of resin and hardener, with the filler material, is degassed under vacuum and at controlled temperature, before a final mixing and introduction into the moulds under vacuum. The high technology of our casting station and the quality of the components used enables us t manufactures cast coils with practically total absence of partial discharges.

The structural fixing elements, both the tightening beams and the support and transport frames, are made of steel sections. In order to eliminate vibration, layers of resilient material are interleaved between the magnetic circuit and the structural elements and also between the windings and supporting parts. This means that the expansion of the coils produced by increases of temperature is absorbed, as well as the vibration of the magnetic sheet due to construction.

VENTILATION
In order to avoid excessive and damaging heating, and for correct operation, it is essential to dissipate the thermal energy produced by the transformer during operation.
The natural circulation of air is directed from the lower part to the upper (chimney effect) and the dimensions of the openings are according to the losses to be dissipated and the temperature of the air entering and leaving the cell. The lower opening must be located close to the transformer, as low as possible, while the upper one must have a cross-section 15% greater to compensate for the lesser density of the hot air.

• Surge arrestors
For a complete protection of the transformer.